Why Volcano Days
The off shore drilling platforms in the Gulf of Mexico and the North Sea are amazing examples of geology, engineering, and plain old hard work! These “sentinels” mark the path of our journey to quench an ever growing thirst for oil. This well traveled road has passed through many communities in the mid-Ohio Valley; but one city, a town now gone, would be marked with a large star if the journey for oil were mapped: Volcano, West Virginia.

Volcano was a thriving oil boom town, along the border between Ritchie and Wood Counties that by 1874 had introduced the bath tub to Wood County!

Volcano can claim the following firsts:

In addition to countless oil rigs, Volcano had an opera hall and establishments serving every need…and desire for a population of several thousand. There was a railroad providing transportation to Parkersburg via the B&O line. How many cities in 1874 America had a railroad! Volcano was a vibrant and colorful town reminiscent of the towns made famous during the settlement of the west, especially the towns of the California gold rush.

The memory of Volcano has been commemorated every year at Mountwood Park through the “Volcano Days” celebration, a fun-filled weekend melding the past and present.

Former citizens and friends of Volcano have shared a dinner every year since 1893 to reminisce the history and legacy of Volcano. 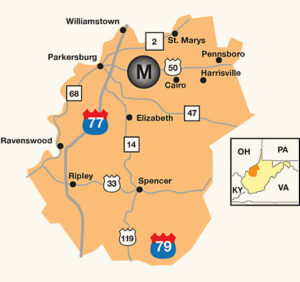